Ever since the still heartbreaking news of the death of 80s All Over, I’ve pondered what I could do to pay my respects. I thought long and hard and decided to tour the country, looking at ads for movies in 1979. Each month I chose a different city and found an ad to sum up the state of the B. And we are not lacking.

We kick off our tour around the country in 1979 in Victoria, Texas. Why Victoria? I did a lot of time browsing the Advocate and will return in time to one of the most fertile markets for Bs ever. We look in now at a Mexican horror movie that exploited Bemuda Triangle fever. Yes, they technically had the rights to THE BT book. But this is, you guessed it, a killer doll/possession movie. Logical, huh? This was a hit film. Because of course.

To Atlanta! To Brucesploitation! It’s taken way too long to get here. Bruce Lee was enough talent for a career with his rare charisma, movie star looks, and legendary (if frankly mythologized) martial arts skills. He only made very few films so the void had to be filled in. It should have been filled in with the diverse field of talent coming up (and would in time once one Jackie Chan arrived). Instead they tried to pass off Asian after Asian as an imitator. So about this ad, which you know is lying. It’s got clips from his childhood movies. The rest of the film? An imitator. There was, I will note, one great piece of exploitation I’ve found: episodes of Green Hornet were cut together and shown. That? That’s cool. 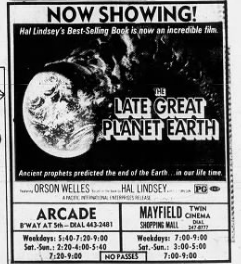 Paducah, Kentucky brings us Hal Lindsey stumbling across the country. Many of these played multiple markets over long periods of time. This was in Atlanta at the same time as the ad above. Based on the blockbuster book, this is a look at evidence the apocalypse is coming. In 1979. I’m saying nothing. Orson Welles narrated. John Huston was in The Bermuda Triangle. Huston at least got to go out on Prizzi’s Honor (which is so fricken great) and The Dead. Welles had to wait until long after his death for The Other Side of the Wind to give him that final win (which gave Huston a last W as an actor!) These weird documentaries were very common btw. Chariots of the Gods got one. Sunn Classic Pictures existed for them.

Boston! A bigger market actually shrinks our B-options. B-movies hid in small markets. So we’re looking at a very bad idea. This was the pilot for the show. Let me tell Hollywood something: this never works out. Either the show dies fast (this was a two season wonder) or the pilot is by far the absolute worst part (The Clone Wars.) Pilots for unmade shows fare way worse, such as the only redeemed by Mary Elizabeth Winstead Sky High.

Now we land in Billings, Montana and we land on a film that highlights the way a b-movie can become more. There’s no reason for me not to put Phantasm here. It’s a weird little film that was so low budget the creator’s mom wrote the novelization. Yet I hesitate. Like I wouldn’t put Dawn of the Dead here. Is this different? It’s not unknown. There’s iconic images. It’s the best known b-ad I’ll ever run, I think. And that is a great gd ad!

Detroit! Good B-town! And this is a prime example of a misleading ad. This looks like a fun, silly sex comedy. It’s an exploitation film about a student who seduces her teachers, fails school due to a female teacher, turns hooker, turn hitwoman, turns dead. Good lord how did this happen? This screams first draft. I’ll say this: I doubt anyone who showed up was disappointed even with such a dark plot. This sounds pretty high grade exploitative. Tons of nudity as promised on the poster.

Back away from major markets in Corvallis, Oregon. I love how long it took films to crawl across the nation. Today, you can watch these films instantly in your living room. This was an anthology. It sounds decent. Dull ad though. Also Atlantis fever below. We were convinced the ocean was less interesting than it is when we were obsessed with finding civilizations and not the coolness there is. 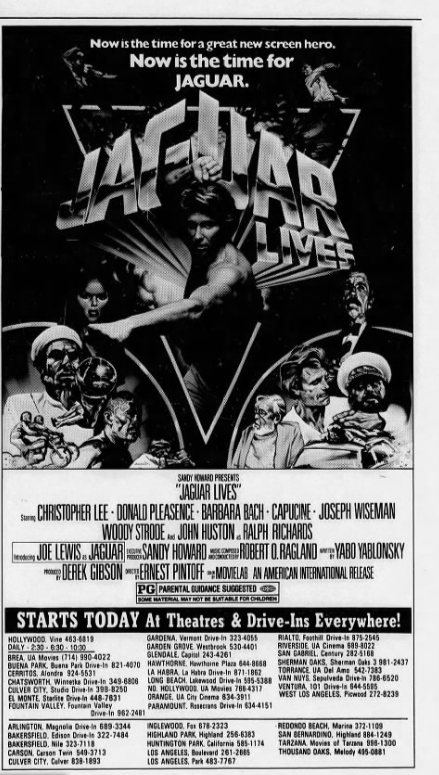 I decided it’d be fun to take the tour to the best market for film, LA, on the worst weekend of the year: Labor Day. I was not let down. The international market really wanted Joe Lewis to be something. You’ve never heard of him until now. But you’ve got the great Christopher Lee here, long before he was lucky enough to have one of his last roles be in a film of one of his favorite books. You’ve got John Huston back because apparently being both a legendary character actor and a master director meant nothing in the 70s. Oh It’s a James Bond ripoff but you figured that. 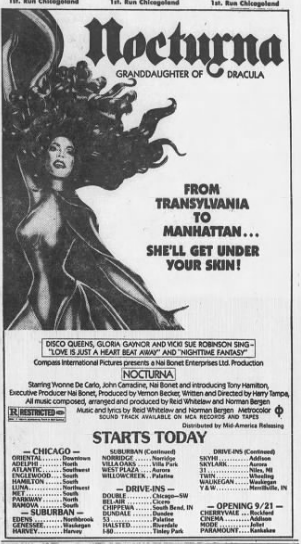 Catching a flight to Chicago. And I just love finding things like this. This is a film about how disco makes a vampire into a human. Yup, that was a real plot. You have to be giddy finding that! This was a vehicle for the film’s star Nai Bonet, who executive produced and crafted the story and after this quit film forever. This is exploitation of everything popular–Frank Langella’s Dracula was in release that summer–in one shot.

Halloween weekend in Oklahoma City. So we’re going with a double feature. Disco Godfather is better known due to Moore’s legendary status. It is thoroughly ridiculous. Nathan Rabin gave it his treatment. As for When The Screaming Stops? It was already 5 years old. It’s Spanish, about a reptilian monster posing as a woman stalking a teacher. It sounds bad but not dull.

On Black Friday, we’re in Houston. This one was the kind of b-movie sold with contests as it was in Huntsville, AR with an ad I can’t properly share but which sold a coloring contest to get people in. Looking at the poster, Lee is back. Peter Cushing isn’t on the poster but he’s here, likely having a nice long drink with his friend. Emma Samms from Dynasty, Mickey Rooney, Art Malik, and John “Cliff Clavin” Ratzenberger are also here. This was actually an early Orion Pictures film. Ambitions were high. This seems like one to be at least intrigued by.

And we come home. Little Rock. And…uhhh…. I’ve got next to nothing. Google doesn’t recognize it. Bing has a tiny bit more but barely more. It’s from 1973. It’s about a mystic raising a zombie army. Daughter of Dracula–there’s an error–is a Jess Franco vampire movie. Not much to say when I note that.

And so we’re here at the end of the year. A lot of oddities. A certifiable b-classic. A lot of trends. In some way I tried to tap into all the big recurring types. I did leave family films off until the end but those are headed down the road, especially in the Wilderness movie. We would look in on those next but we’re detouring to look at an incredibly rare but vital b-subsection.

Next time: The Test Marketed B-Movie.